Mommy Issues, a theatre and dance piece choreographed for the Bytom-based company ROZBARK by Cecilia Moisio. The piece was produced in collaboration with the Institute of Music and Dance as part of the Choreographic Commissions 2016 programme.

Cecilia Moisio’s piece touches upon such issues as love, lies, dependence on parents and letting go of the past. The personal experience of performers starring in Mommy Issuesact as a starting point for Moisio’s story. The stage is filled with rooms in which male dancers interpret various behaviours, emotions and psychological patterns rooted in their family houses.

Mommy Issues is based on the concept of the Oedipus complex, introduced by psychoanalyst Sigmund Freud. This psychoanalytical notion implies a child desires a sexual relationship with a parent of the opposite sex, thus sparking a rivalry with the parent of the same sex as the child. According to the theory, the rivalry stage is vital for the proper development of boys and lays an important foundation for their interactions and relationships in adult life. The Oedipus complex is perceived as the apex of the individual’s drive for success and love.

With Mommy Issues Cecilia Moisio continues her inquiry into psychological patterns within the family structure. She began to work on this issue in 2015 with Mum’s The Wordand the dance film SHE/HER, in which she explored the mother-daughter relationship. In Mommy Issues, Moisio will delve into the masculine perspective, examining how each performer deals with the eponymous question in their own life. What are the repercussions of being stuck in a dysfunctional mother-son relationship? How do men express (or repress) their problems? Can they address their fears and their past, or will they hold it all up within? Text, movement, acting and voice production will be interconnected within a powerful and emotionally charged performance, intended to encourage the audience to contemplate their own familial relationships and the patterns that inform them. 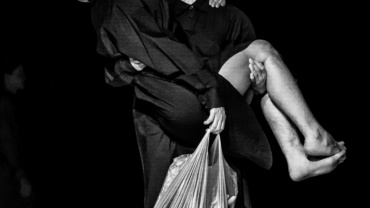